Objective of the Game

There are two opposing teams in the game: the Terrorists and the Counter-Terrorists.

The Terrorists win by: 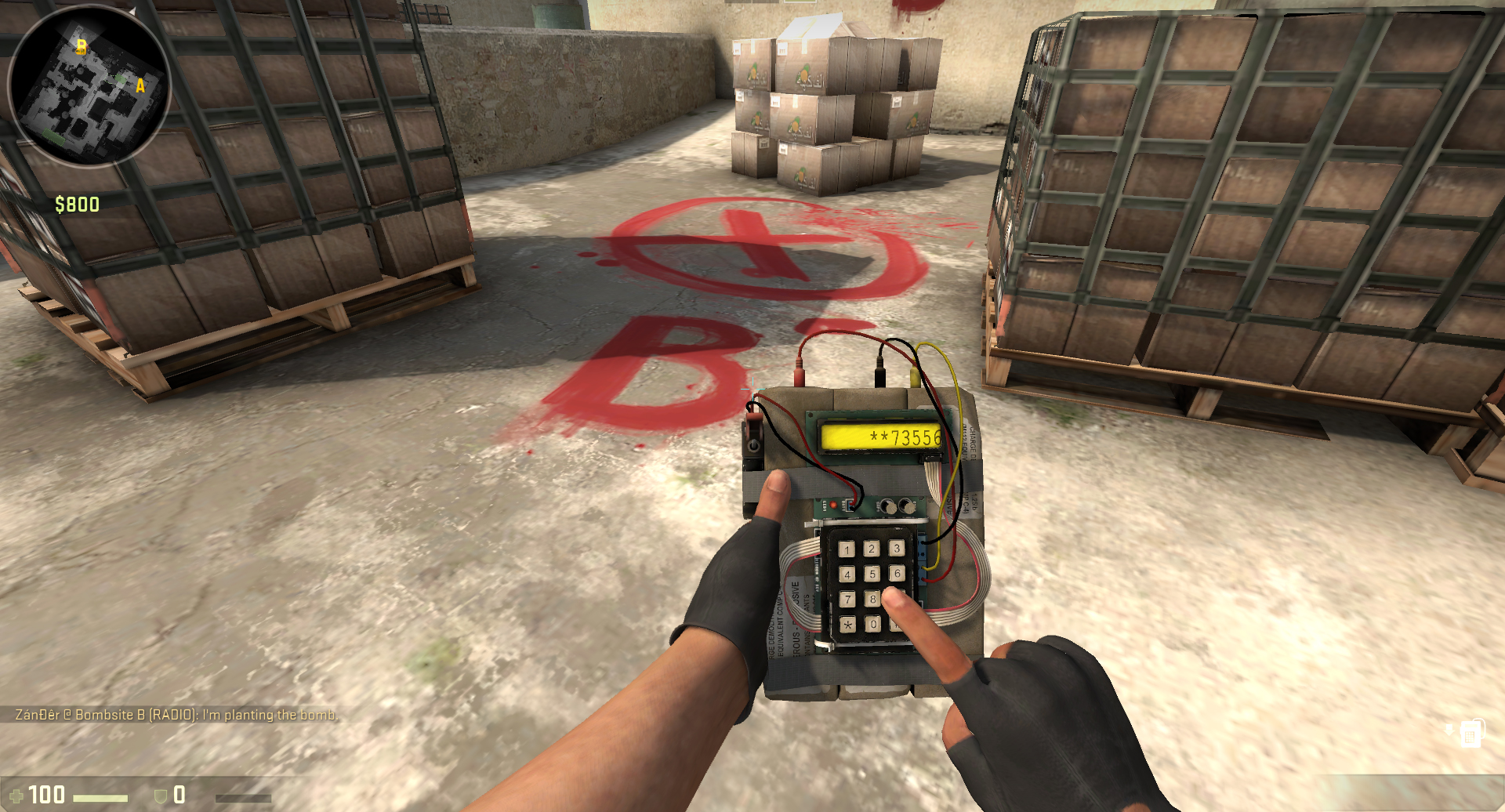 POV of Terrorist planting the bomb

The Counter-Terrorists win by:

POV of Counter-Terrorist defusing the bomb

There are 5 primary game modes:

In the Competitive Game-Mode, 10 random players are selected in a queue and fight in a best of 30 game. In-Game materials that help the player such as armor and kits are needed to be purchases separately by the player. Competitive matches typically last from 45 minutes to a full hour and a half. Players are arranged based off of an in-game rank, which is gained based off of player performance, wins, and experience points. Competitive in the ingame program is known as "matchmaking". Softwares such as FACE-IT and ESEA enable players to queue with CS:GO professionals and other better players.

The Casual Game-Mode is similar to Competitive, but not as serious. For example, facilities such as armor and kits are automatically given to each player, and more money is given to the players. Additionally, actions such as friendly-fire and collision with other players are not registered or reprimanded.

In the Deathmatch Game-Mode, players are able to use any weapon and must every player in a free-for-all in a 10 minute match. For every person a player kills, they gain points. Certain weapons give more points, while other weapons do not give as much. When a player is eliminated, they respawn, and they are given the option to keep their current weapon or to change their weapons. The player to get the most points within the 10 minute duration wins the deathmatch. Deathmatch is typically used for aim practice.

In the Arms-Race Game-Mode, players start off with SMGs. As they kill more enemies, their weapon becomes progressively better and upgrades to another weapon. After the player 2 enemies, they receive an upgrade. Once the maximum upgrade is achieved, the weapons become gradually weaker, until the player is given a knife. The first person to kill an enemy with the knife wins.

In the Demolition Game-Mode, 10 random players are selected in a queue and fight in a best of 20 game. Typically, there are 2 bombsites, but in demolition there is only one. Players cannot buy weapons, rather they are immediately given a certain weapon and utility based on how many kills they get. Unlike competitive, where the players must stay for the entire duration of the game, players are able to leave the match in demolition if they must.

In Hide-And-Seek, a player is chosen as "it". This player must find the hiding players and eliminate them. The hiding players are given 1 minute to hide in a certain map and must remain hidden or survive until the round timer is over.

In Minigame servers, players vote for the minigame they want to play. Minigames include Gravity Tag, Grenade Launcher, Flying AWPs, and more.

BHoping, also known as Bunny Hopping, is a motion executed in the game that enable players to move faster. This is done by jumping repeatedly, right as the player is about to touch the floor. In BHop servers, there are obstacle courses where players BHop and attempt to finish the course in the fastest time possible.

In Worshop servers, players are able to adjust the complexion of their weapons for free, also known as skins. Typically to use skins, players must pay money. However, workshop servers enable players to use them for free.

At the end of each round, players are rewarded based on their individual performance with in-game currency to spend on more powerful weapons in subsequent rounds. Winning rounds results in more money than losing, and completing objectives such as killing enemy players gives cash bonuses. Actions such as damaging/killing your teammates can result in a penalty and deduct your money exponentially.

Several actions can be done in order to gain more money. These include: